Join Echosens in helping raise awareness about the importance of early detection of liver disease.

Celebrated every year in April, National Minority Health Month builds awareness about the disproportionate burden of premature death and illness in minority populations and encourages action through health education, early detection and control of disease complications.

During this time, Echosens is highlighting the impact of non-alcoholic fatty liver disease (NAFLD) and its more severe from nonalcoholic steatohepatitis (NASH) on minority populations. Fatty liver disease is a silent epidemic affecting millions of Americans as the rates of obesity and diabetes continue to accelerate.

Studies show that in the United States, NAFLD is likely to increase from 83.1 million to 100.9 million by 2030, and NASH from 16.52 million to 27 million. A meta‐analysis reports that NAFLD prevalence was highest in Hispanics, intermediate in whites and lowest in blacks. Among patients with NAFLD, risk for progression to NASH was also higher among Hispanics.

One study found that the demographics of patients seen at Federally Qualified Health Centers (FQHCs) from 2005 and 2014 have shifted to where the population of young, low-income, uninsured or Medicaid-insured, racial and ethnic minority Americans increased more rapidly than other demographic groups. Proportions of minority and racial groups, largely Hispanic and Black populations, seen by FQHCs also saw an increased rate of change. The minority group with the largest growth rate was the population of Hispanic Americans, increasing from 11.2 percent in 2007 to 13.4 percent in 2014.

This is significant because studies show that Hispanics and patients with diabetes are at greatest risk for both NAFLD and NASH, and the prevalence of both is higher in the Hispanic population. Those with Type 2 diabetes and high rates of liver fat are more likely to have progressive liver disease than those with Type 2 diabetes alone. The 2019 Standards of Medical Care in Diabetes issued by the American Diabetes Association recommend that patients with T2DM or pre-diabetes and elevated liver enzymes or fatty liver on ultrasound should be screened for the presence of liver disease.

A growing number of physicians – particularly at FQHCs which treat a significant number of minority patients — are adopting FibroScan®, a non-invasive technology that quickly provides a quantitative assessment of liver stiffness and liver fat at the point of care.

Designed as a portable tool, FibroScan® enables clinicians to play a role in reversing liver disease when caught early. This tool is covered by Medicare, Medicaid and many insurance plans, and can be operated by a medical assistant for immediate interpretation by a healthcare professional.

This April, get involved and help spread the word about the importance of screening for liver disease, especially among Hispanic populations.

Learn why is FibroScan® unique 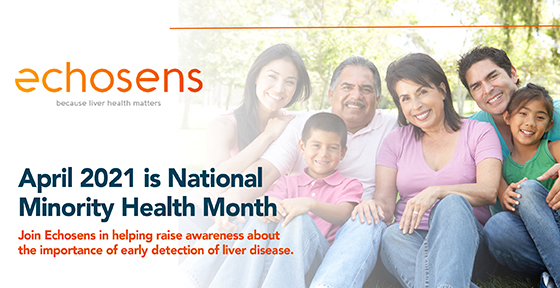